The first edition of the MSF Paediatric Days took place in Stockholm at Karolinska University Hospital on September 23 & 24, 2016.

Médecins Sans Frontières (MSF) is an international medical humanitarian organization specializing in humanitarian emergencies such as conflict, natural disaster and epidemics. A majority of MSF beneficiaries are children under the age of 15 who are also one of the most vulnerable groups in the fragile contexts in which MSF operates. MSF faces significant challenges in providing paediatric care at field level, frequently struggling to locate those with adequate paediatric skills and to match them to vastly differing field and emergency contexts. There is also a lack of paediatric guidelines and tools that are adapted to these low resource humanitarian settings.

The first ever MSF Paediatric Days took place in Stockholm on 23- 24 Sept 2016 in order to address these concerns. The days brought together a diverse mix of 180 MSF staff, academic clinicians, and researchers with the shared goal of improving medical care for children in humanitarian settings around four urgent paediatric topics:

Shock is one of the major causes of under-5 (U5) mortality. It is part of a complex continuum of disease processes rather than a single event. There is a lack of research for paediatric shock treatment, complicated by a wide range of definitions of shock. Furthermore, shock patients are a heterogeneous group of patients (e.g. those with malaria vs extreme dehydration vs. sepsis) who require different treatments. One approach that could improve shock management of children is to train hospital staff to deliver tailored care specific to the underlying conditions (e.g. those with anaemia; dehydration; malnutrition; sepsis). Another approach that could improve paediatric critical care could be to define MSF medical facilities by standardised levels of care based on capacity (incl. equipment, resources, HR and services offered). This would not only allow the use of checklist and standardized tools and manuals adapted to each setting but would also better highlight specific needs for each setting. Many questions remain regarding paediatric shock treatment in low resource settings (LRS), such as what kind of fluid should be given, how much and at what rate, as well as whether sub-groups of shock patients can be broken down further, and specific treatments defined. Guidance is also urgently needed for neglected patient groups such as children with severe dehydration due to gastroenteritis or malnutrition.

Sickle Cell Disease (SCD) causes an estimated 5% to 9% of all under-five child mortalities in Africa. The absence of comprehensive strategies and clinical guidelines for managing SCD at field level are major constraints. Widespread stigma and misconceptions about the disease add to the challenges. Early diagnosis, followed by a basic preventive care package should be scaled up at primary care level. Treatment of complications includes antibiotics, pain management, intravenous fluids and blood transfusion. Patient education and psychosocial support are also crucial. Today, most children with SCD die undiagnosed but promising point-of-care tests currently in development could soon allow early diagnosis on a large scale. Long-term treatment with hydroxyurea (HU), a simple, inexpensive and highly effective drug could also have an impact in LRS but its safety, feasibility and effectiveness in patients in LRS needs further assessement. Meanwhile more standardised clinical strategies and models of care are needed. Public awareness campaigns are urgently needed to promote a better understanding, acceptance and knowledge of SCD in communities as well as for advocacy.

Neonatal mortality represents approximately 44 % of U5 mortality. Neonatal survival in low-resource and remote settings depends on staff skills, hygiene and organisation of care rather than complicated technology. Examples from several different settings show how staff trainings and improving organisation of care (e.g. infection control, increasing uptake of Kangaroo Mother Care (KMC) and neonatal resuscitation) can enhance outcomes. Task-shifting fromsome of nurses’ tasks to mothers can also improve KMC outcomes. KMC is a practice for the routine care of newborns under 2000g at birth and its effect on newborn survival is established. While technically simple, implementation presents challenges, such as physical space constraints, the lack of trained support staff, and hesitant attitudes of parents, staff and communities. This will require increased commitment within MSF, including the scale up of KMC training for nurses, midwives and nursing Non Invasive Ventilation (NIV) is an effective life-saving intervention for premature newborns in high-income countries but given implementation challenges, its use is limited to a few MSF (mid- and high-care level) settings. Pre-requisites for introducing NIV into MSF settings include basic newborn care and infrastructure in place, along with trained staff. Assessment of a few pilot settings could facilitate a broader implementation within MSF. Neonatal Intensive Care Units (NICU) can reduce mortality in low birth weight (LBW) and pre-term infants, but surviving infants have an elevated risk of developmental impairments. Caring for these and other disabled children represents a particular burden for families in low-resource and conflict settings. MSF NICU programmes should therefore include follow-up of newborns after discharge, to identify those with developmental disabilities and as far as possible enable support to improve their quality of life.

NEONATAL INFECTIONS IN FIELD SETTINGS – A MAJOR CAUSE OF MORTALITY

Prevention is key in reducing neonatal deaths from infection in settings where diagnosis is difficult (due to lack of simple diagnostic tools and of laboratory capacity). Treatment is complicated due to lack of timely access to antibiotics and in light of growing antibiotic resistance. The challenges in reducing mortality from neonatal sepsis are largely around scale-up and delivery of a few highimpact interventions, including distribution of clean birth kits, chlorhexidine chord care, rapid detection and treatment of infection in mothers and newborns; simplified and adapted antibiotic treatment schedule adapted to context, early initiation of exclusive breast feeding and scale up of KMC. Success requires both communityand hospital-based strategies. As MSF improves the level of neonatal care at some projects and brings neonates together in NICUs, the risk of nosocomial infection grows, including with antibiotic-resistant pathogens that often have higher mortality rates than drug-sensitive infections. Priorities for optimising the organisation of care in NICUs should include measures aimed at lowering transmission of nosocomial infections (e.g. reducing crowded wards; increasing space between infant beds).

- To identify gaps in knowledge, research, and development of medicines and diagnostics geared towards paediatric patients in humanitarian settings.

- To understand the latest evidence and best practice and how it can be adapted to the MSF field.

- To generate possible solutions and recommendations for contexts where MSF and other humanitarian organisations work.

- To contribute in highlighting paediatric needs in MSF operations.

- To provide a platform for MSF’s paediatrics community to interact, and share and reflect upon MSF paediatric goals, priorities and gaps with paediatric actors and academia. 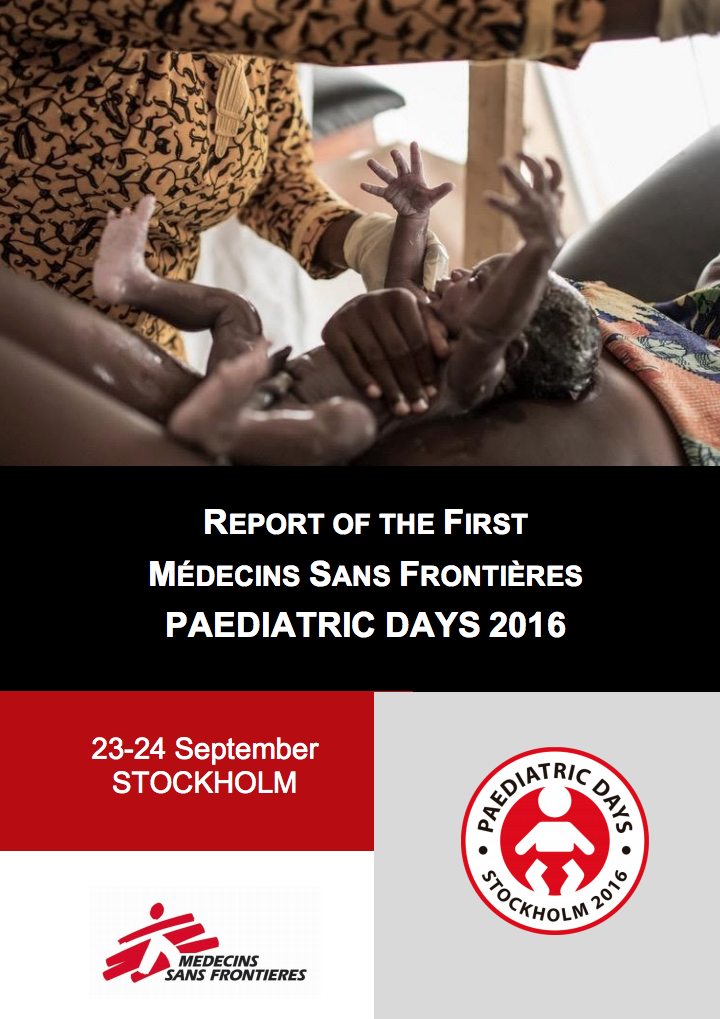 Oxygen, air pressure or both for respiratory distress in the preterm infant? Mats Blennow

Frontline Paediatrics and the Birth of the Paediatric Days Sahar Nejat

My life as a Sickle cell Patient David Issom

Bringing Paediatrics to the frontline with Telemedicine Fabien Schneider